I have been exploring Textures in Delphi 3D and this required an understanding of colors and at a later time will require the construction of very specific Bitmaps modeled on the one used by Anders Ohisson in his Maths Function Demo. Here I discuss two simple demo projects and a library of functions for creating bitmaps and textures in Delphi for Delphi.

This folder contains two simple demo projects and a library of functions for creating bitmaps and textures in Delphi for Delphi. Full Source is available from GitHUb Both projects and the library are “proofs of concept” and used just to try things out so you can expect to be changing code to look at different aspects. The GitHub copy is just a snapshot in time.

This file contains a number of function to create auto generated bitmaps most of which are plays around the logic of Anders’ 360 x 1 bitmap showing the rainbow of colours used in his Maths 3D Functions project but which enables grid lines to be added and allow you to see the effects of changing the saturation, hue, luminas and opacity.

One function “LandscapeBitMap” starts to look at producing the special effect bitmap I need for my future project.

The file also generates and applies Material sources of various complexions to 3D components derived from TCustomMesh. These default creations are useful when you want to programmaticcally play with Material sources.

A single form (BitmapForm.pas) with multiple image components which are loaded programmatically when Timer1 fires. It uses UsefulBmpConcepts.pas to add Bitmap Images to Firemonkey Timages and TImageControls. The Bitmaps generated have graded Hue (H), Saturation (S), Luminance (L) and Opacity to demonstrate and easily play with these effects. To show the effect of Image Opacity the background behind these controls have labelled text. 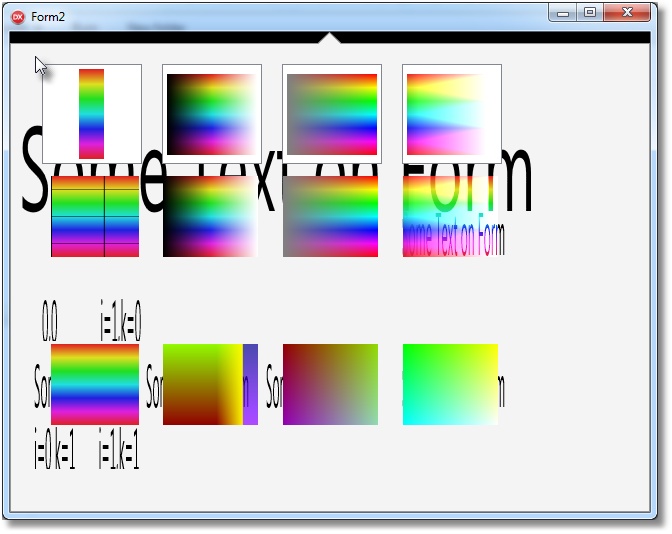 3D shapes in FireMonkey have many texture or colour options and this project was used to examine some of them. A single form project (BitMap3DForm) which looks at the use of Texture, Opacity and TwoSided on the 3D shapes components on the form.

A shape can have a bitmap added using a TTextureMaterialSource but we start off with a bitmap with transparent sections added to a TLightMaterialSource. The Cube is single sided with 0.7 Opacity While the Cylinder and Cone are Two Sided with Opacity = 1.

After the timer fires the images currently change to the spectrum bitmap with a Opacity taper. Again the code in GitHub is a snapshot in time of code which I am still playing with to see differnt the effects. 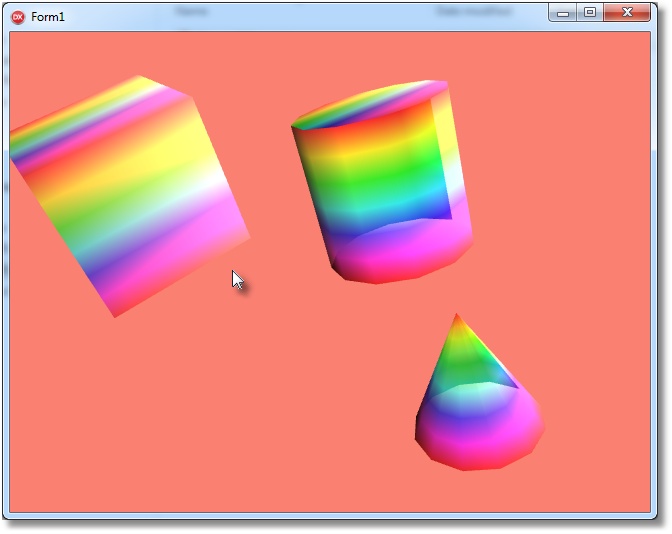